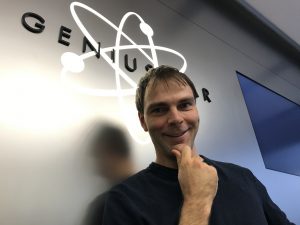 Stefan Heinbockel is an award-winning engineer and inventor. Currently he works as a project leader at BMW in Munich. There he is responsible for the development of software for car access.

He is interested in all kinds of technology and their application to our everyday life. He always keeps his eyes open for interesting technical solutions that he can employ in novel ways, which often leads to new patents for his employers.

Another interest of his is the design of complex systems, both in software and in hardware. Techniques he likes to employ are Test Driven Development, static code analysis and formal verification methods.

He lives in Munich together with his wife Mariya, who is an author of  fiction and non-fiction books.

Stefan earned his Bachelor’s degree in Electrical Engineering in 2005 – 2008 at the Baden-Wuerttemberg Cooperative State University (DHBW) Stuttgart. During that time, he was employed at Siemens Electronic Design and Manufacturing Services, where he filed his first patents.

In 2008, he won the Freescale Design Challenge together with Jens Böckermann. Their award-winning design was a platform for Energy Harvesting applications which they also patented.

From 2008 to 2010 he made his Master’s degree at the Technical University of Munich. During that time, he worked as a student assistant at the TUM department for Human-Machine Communication.

He spent the autumn of 2009 as an intern at Siemens Corporate Technology in Bangalore, India.

From 2010 to 2012 Stefan worked for the Siemens department of traffic control systems. There he was responsible for software development and system architecture of the EPOS charging systems for electric vehicles.

Since 2012 he has been working for BMW in Munich. He started out as a software developer and is now working as a project leader. In addition to developing high-quality automotive software, he focusses on ways to improve our cars – which earned him the BMW EE Innovation Award in 2018.

Stefan has filed more than 15  patents during his career.  Here is just a  small selection of the patents. He keeps an up-to-date list on his LinkedIn Profile.

Besides his interest as an engineer and inventor, he loves building model railways and drawing comics. If you are interested, you can find pictures of Stefan’s creative work on his Instagram account.

If you want to connect with Stefan, you can find him on LinkedIn or on Facebook. You can also follow him on Github.